Author, journalist, lecturer, and TV host, Steven Raichlen is the man who reinvented modern barbecue. His 31 books include the international blockbusters The Barbecue Bible and How to Grill (with combined sales of more than 3 million copies), and the New York Times bestselling Planet Barbecue and Project Smoke (Workman Publishing). His latest book, The Brisket Chronicles, explores how this epic meat is prepared around the world, from Texas barbecue to Jewish pastrami, from Irish corned beef to Vietnamese pho. His next book, How to Grill Vegetables, launches in April, 2021. Raichlen’s books have won 5 James Beard Awards and 3 IACP-Julia Child Awards and been translated into 17 languages. In 2012, he published his first novel: The Hermit of Chappaquiddick.

An award-winning journalist, Raichlen writes regularly for The New York Times. His work has appeared in The Wall Street Journal, Esquire, GQ, and all the major food magazines. In 2015, he was inducted into the Barbecue Hall of Fame.

Raichlen is the creator of the Project Smoke and Barbecue Essentials lines of grilling accessories and seasonings. His latest venture is a new restaurant concept—the Star Grill by Steven Raichlen, launching on the Windstar cruise line in 2021. The founder of Barbecue University at Montage Palmette Bluff in South Carolina, he has lectured on this history of barbecue at institutions as diverse as Harvard, the Library of Congress, and the Smithsonian.

Steven Raichlen holds a degree in French literature from Reed College in Portland, Oregon, and studied medieval cooking in Europe on a Thomas J. Watson Foundation Fellowship. He was also awarded a Fulbright. He and his wife, Barbara, live in Miami and Martha’s Vineyard. 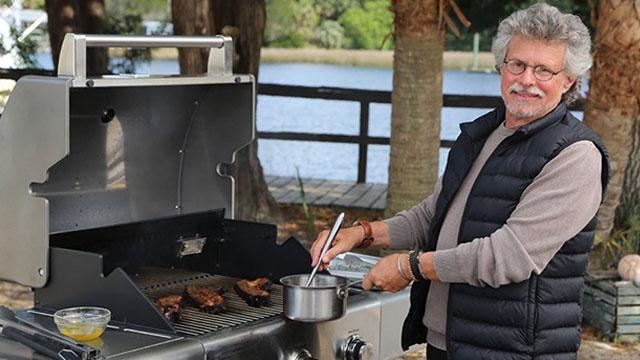 For the last 25 years, grilling has been my passion and my profession. So you might think I have a ready answer to the simple question, “Why do I grill?”